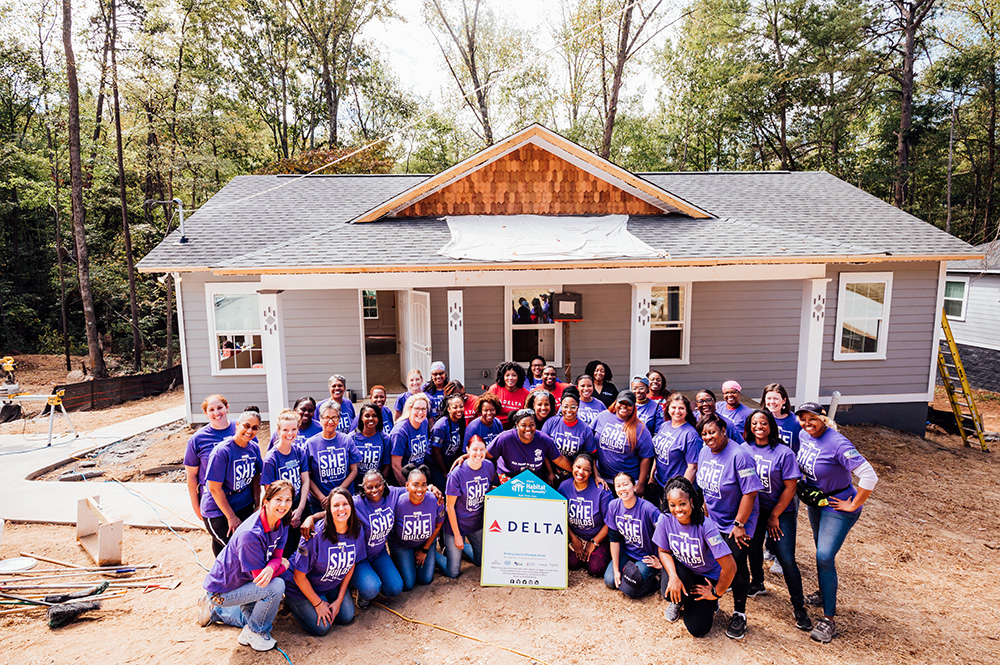 Volunteers will also build homes in Atlanta and Los Angeles in the fall, including one build funded by recycling proceeds​

The SHE team worked alongside homeowner KeKe, who has worked hard to qualify with Habitat and to help build the South River Gardens home for her two children, a son age 9 and a one month old daughter. KeKe, a dedicated library associate for over four years, is eager to provide stability for her newly expanded family. She is most excited about the yard where her children will be able to safely play at her new home.

“There’s nothing more rewarding as a Delta employee than the opportunities we have to give back to our community. Participating in the Atlanta Women’s Build for the second year in a row continued showing me just how amazing the women of Delta truly are,” said Sheyvone Frazier, In-Flight Service and SHE Communications Officer. “The day was filled with laughter, teamwork, connection and hope — It was a day I’ll always remember.”

Each year, Delta employees volunteer their time and talent through Delta’s partnership with Habitat for Humanity to build homes in the U.S. and internationally to help families attain safe and affordable homes. Following Delta’s Global Build with Habitat for Humanity in Recife, Brazil in March, the airline also built two homes in Atlanta in September — one of which was built with recycling funds, and volunteers will complete home number 273 in Los Angeles on Oct. 19.  Delta has partnered with Habitat since 1995 to help families build a place to call home.

The all-woman build was a week after Delta’s 5th WING Flight, another trip coordinated from nose to tail exclusively by women. Natalie Morales, West Coast anchor for the TODAY show on NBC, joined Delta to cover the journey and brought an all-woman video crew.The annual flight is a part of Delta’s efforts to promote gender equality in and out of the workplace. In 2019, Delta again achieved 100 percent pay parity for employees in frontline jobs and was awarded a “Best Workplace for Women” by Great Place To Work® and Fortune for the third year in a row, as the only airline on the list. Delta also serves women through partnering with Women in Aviation International, National Council of Negro Women, CARE and Atlanta’s Women Foundation. ​